For the first time ever, India will sell more than 300 million mobile handsets in 2019.  This would be backed by growth in Smartphone as well as Smart-Featurephone categories.  Featurephones will continue to exhibit declining trend.

Commenting more on the outlook, Faisal Kawoosa, Founder & Principal Analyst, techARC said, “There is a large replacement cycle due in 2019, for users who bought their first 4G Smartphone between 2015-2017.  This is going to bring back the double digit growth for the segment in 2019.”

“In India, the replacement cycles vary from region to region.  While people in South and West replace their Smartphones even in less than a year’s time, the users in the Eastern parts of the country, tend to hold Smartphones for 4-5 years.  North Indian users are somewhere in-between the two,” Faisal added.

The outlook for new Smartphone market does not seem to change than the 2018, and there is little movement expected in Featurephone to Smartphone upgrade.

In 2019, six (6) of the prominent brands are expected to witness growth in their sales compared to 2018.  These include Xiaomi, OnePlus, Google, Nokia, Asus and Realme.  The growth is expected as a result of their continued strong hold of the segment(s) they operate as well as rejig of products, pricing, promotion as well as place (channel) strategies that many of these worked on during 2018. 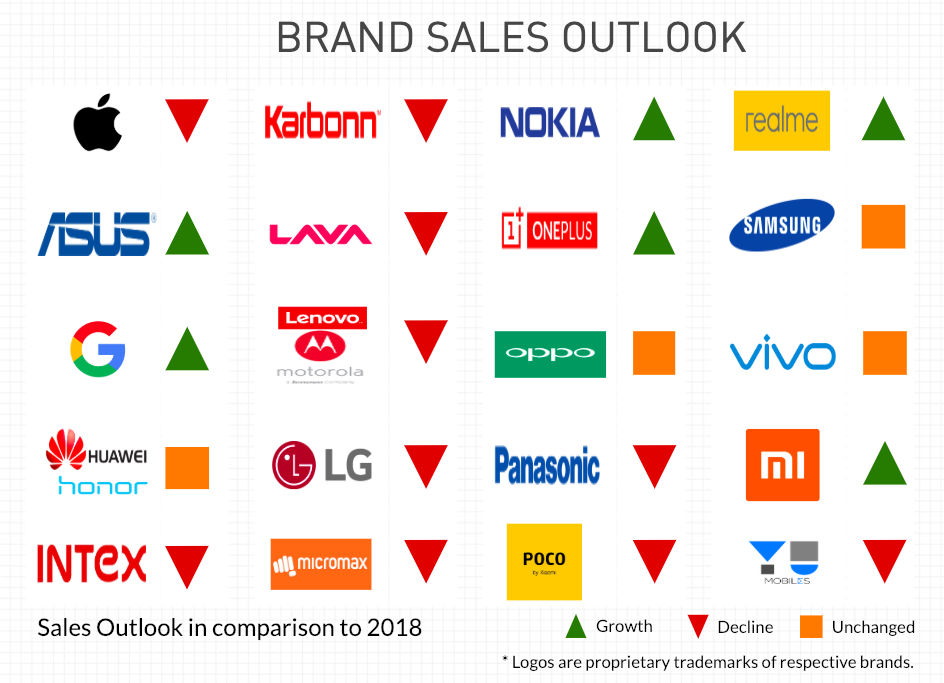 Unfortunately, none of the home grown brands is expected to show reversal of declining trends that continued all through 2018.  For the incumbent Samsung and some of the strong challenger brands including Oppo, Vivo and Honor-Huawei, they are expected to remain flat and continue to show similar market performance as in 2018.

From the global market outlook, 5G and Foldable Smartphones are going to be the two key attractions of the industry.  However, 2019, may not be the year for India to witness these two coming.

Sharing more on the technology outlook, Amit Sehgal, Principal Consultant, techARC said, “India would witness more of specifications and features percolating from the premium to lower segments of Smartphone market as well as AI and other software driven optimisations being introduced in 2019.”

“As regards 5G Smartphone, it is unlikely to be launched in India in 2019,” Amit further added.

Some of the key technology trends for the industry in 2019 identified include:-

Entry level Smartphones: This segment will substantially squeeze in 2019. There will be many brands who will divest their portfolios from the segment.  This means Smartphone market will again have a threshold in the range of Rs 5,000-5,500 giving serious players a chance to introduce durable Smartphones for the first time users, though at an extra cost than the present benchmark.

Sub 10,000: This segment will also see declining growth as most of the market opportunity would lie across the segment.  This is because the sales of 2019, would be primarily led by the upgrade/replacement market.

Mid range Smartphones: This segment, Rs 10,000 to 25,000 would see a lot of opportunity in the market.  Around, 50% of the sales will fall in this segment feeding the people who will replace their first 4G Smartphone.  The brands catering this segment will have to work on delighting the experience of 2nd time 4G Smartphone buyers.

Premium Smartphones: This is among the favourite segments of Indian Smartphone users where they get all the premium experience at half the cost of some of the flagship Smartphones of Tier 1 global brands.  In 2018, we saw a number of brands attempting to enter this segment, which is presently primarily served by OnePlus.  It will be a tough challenge for these new comers in the segment to mark an entry as there are strong user preferences for the market leader in the segment.  This segment has a lot of opportunity to get old iPhoners replace their Smartphones.  As iPhones cross 6 digit price tag in India, the addressable market continues to squeeze and the existing iPhone users prefer to switch to premium segment of Smartphones.

Luxe Smartphones: This segment has been so far divided into Samsung for Android and Apple for iOS.  For the first time, it is expected to have a third serious player in the segment in the form of Google.  The luxe segment users who wanted to stay with Android had little choice and would eventually go with Samsung for its brand value and trust factor.  Now, with Google after its Pixel 3 launch, the market is expected to accept it as another evaluation brand in the category.

The numbers projected are estimations of actual sales and do not represent shipment or sell-in numbers.